skip to main | skip to sidebar

Twenty five SAQA artists have the opportunity to tell a story about a person or project that is making the earth a better place. We have almost a year to create the work which needs to fill a 72" x 72" space plus a smaller version that tells the entire story. I proposed to tell a story from The Nature Conservancy, an organization that I have long been familiar with and highly respect for all the good they are doing nationally and around the globe.

TNC works closely with local groups to educate and involve the groups in a long term sustainable plan for a critical environment. In North Carolina they are working with state and county groups, the US Amy and a number of industrial giants in the state to preserve and restore natural habitats that have been selected as critical.

I contacted TNC and discussed what project they have that they would like to see more widely understood and supported. They told me of the work they are doing with controlled burns in the coastal areas and the mountain areas. Often these controlled burns are around bogs where underbrush is crowding out endangered plants or changing the habitat so that endangered animals cannot survive.

I selected three diverse species to focus on: the NC indigenous Venus Flytrap that needs open areas for the seedlings to sprout and grow, the yellow fringed orchid that needs less competition from shrubs and grasses in order to grow in boggy areas, and the Red Cockaded Woodpecker that needs mature long leaf and lob lolly pines trees to nest in and the trees need open areas and fire to germinate and survive.

I am excited to see that this selection gives me some repetitive pattern and lines to design with and can be made harmonious with color choices.

Here is my first color sketch of the Venus Flytrap. 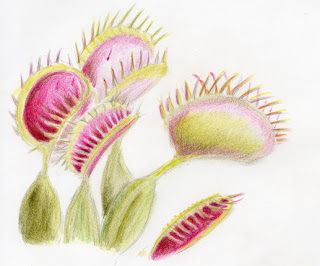 These colors are not particularly exaggerated. Love the inside colors of the spiny leaves that are designed to capture flies. The top two leaves to the left show the trigger hairs that release the capture mechanism that holds the fly while the plant digests it.

I also have a photo of part of the flower head of the yellow fringed orchid. Note the fringe of the lip that is reminiscent of the spikes on the flytrap. 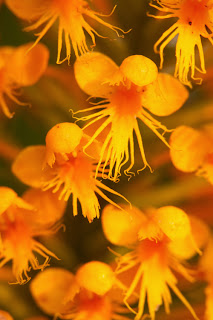 Isn't this going to be fun!

I am a fiber artist working in Charlotte NC, creating realistic, greatly enlarged images of nature. My current work focuses on seeds and fruits of trees and herbaceous plants as symbols of the gifts that come with maturity.

See more of my work on my website: www.nancygcook.com and on the Portfolio- Seed Play section of this blog.

News -- Where to See My Work

See My Art Work In:

Seasonal Palette will be exhibited at the following venues:


Galleries with My Work for Sale